On Zack Snyder and Man of Steel 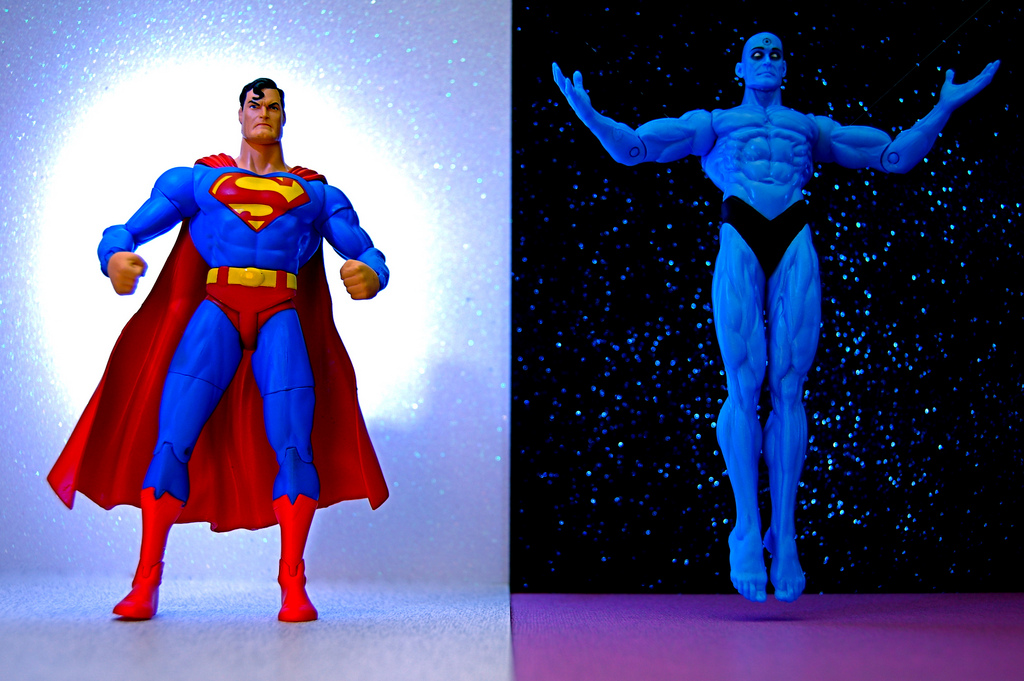 On Zack Snyder and Man of Steel

I’m a Zack Snyder apologist. There, I said it.

Also, I saw Man of Steel, and it was pretty good. It lacks the gravitas of Batman Begins, thanks to weaker execution on the character side, but it is otherwise similar in tone. The nonlinear story helps offset how boring superhero origin stories have become now, and the fights – especially the Smallville skirmish – are really awesome. As is typical for recent live action Zack Snyder films, its Rotten Tomatoes score is about 15-20 points below where I think it should be.

I don’t hate Zack Snyder or his movies, even though that is a cache thing to do in geekdom. Oh, slow-motion fights, yuck. Oh, he changes the source material. Gross. And what the hell is up with Sucker Punch? Dude also looks like a dudebro. He doesn’t get me.

Let’s talk about that dude and his movies for a second.

Why does he deserve better than he gets?

The vitriol leveled at Snyder’s films from the nerd community borders on the absurd, though in the sense of fairness, hyperbolic nerd hate is directed to many places, all the time (current targets: Xbox One, female games journalists, Big Bang Theory). Don’t worry, he is not perfect, and his movies make some grevious errors, and we will talk about all that in a bit.

First, though, here are some bullet points that give him some credit in my eyes. Does my experiences as a writer and director color these?

Dude takes on impossible projects and tries to make them as respectfully as possible.

Zack Snyder made Watchmen, in his (paraphrased) words, because he had heard what people were trying to do to ‘modernize’ the story, and he was horrified. He wanted to do the most honest translation of the work possible. Never mind that countless people walked away from Watchmen because they found it be unfilmable. Hell, the guy even released a gargantuan version of the movie with the Tales of the Black Freighter sewn in, along with the newsstand segments.

Let me say this again: Zack Snyder went and made an unfilmable project, just because he didn’t want to see it ruined.

Say what you will about Watchmen, that is without a doubt the best version of that movie that we would have gotten. This is one of those situations where, if you actually make stories and/or films for a living, it’s very clear that every choice the dude made (well, almost all the choices) was the most sensible, effective choice that could have been made, whilest staying true to the source material. I will debate you right now on this. Squid is missing for a very obvious reason.

Sure, there was always a 1% chance that someone comes along and ‘Kubrick’s Watchmen with an abstract interpretation that fundamentally alters the story for the new medium, like Stanley Kubrick did all the time. No, more than likely we would have gotten a PG-13 Watchmen set in the modern day, and Rorschach and Night Owl save the day at the end. As much as people like to complain about that movie, it’s wildly true to the comic. And frankly, there’s some great stuff in it.

And who in their right mind would make a Superman movie? That character is impossible to nail down. There is no Superman, there is only the Superman an individual audience member knows. Even a copy of the animated ‘Timmverse’ would be risky.

He makes the best fights.

I hear you if you don’t like slow motion intercuts in your fights. I’m not crazy about them either, but even if you remove those shots, you are still left with, hands down, some of the BEST action fight choreography and execution in movies today. You might know Damon Caro from the super fast, highly technical fighting style the assets use in the Bourne movies. And the new Bond movies. And every Zack Snyder movie has Damon Caro as the fight choreographer.

There are some amazing performances in his movies.

Mister Snyder may actually have nothing to do with this, since there are also some pretty bad performances in his movies. But regardless, there are some fantastic and memorable characters brought to life in his movies. The Comedian, Dr. Manhattan and Rorschach are all phenomenal in Watchmen. Gerard Butler was so iconic in 300 that people still make ‘THIS IS SPARTA!!’ jokes (god help us all). Blue in Sucker Punch is a pretty great villain. General Zod was also a pretty good villain, and the various actors playing Clark Kent really hit home the lost feeling of the character.

Sucker Punch is a bad movie. It’s a very bad movie. It is a broken, twisty maze so gnarled that, like Starship Troopers, the film was widely thought to support the very things it set out to critique. Zack Snyder was hailed as sexist and exploitationist…for a movie that criticizes its audience for those exact qualities.

The movie is built around a clever conceit. The ‘dance performances’ turn into over-the-top action setpieces full of zero character development, and tons of hammy dialogue. The idea is that these girls at this brothel are ‘performing’ for their men, and the action scene is the movie’s performance for us. Get it? Get it?? It’s a fanboy movie that critiques the fanboy experience. Yum, delicious irony.

But as you know, if you saw Sucker Punch, the film has tons of other issues. Some atrocious acting and a weirdly tone deaf story (again, more on that later) lead to a rather spectacular disaster that bewildered audiences. Us fanboy guys who objectify our manic-pixie blockbuster eye-candy just thought the movie was bad, and any woman who saw the movie felt the same, and was probably also pushed away by the ridiculously melodramatic (and un/intentionally misogynist) plot.

I watched Sucker Punch three times in theaters, and I also went out and bought the Blu-Ray, and proudly dealt with plenty of friend shaming. I know it’s a bad movie, but man, I love going down the rabbit hole and trying to figure out what the lower levels of the film were supposed to work like. And yes, the action sequences are dumb and crazy and awesome.

Side note: For what it’s worth, I sold the movie last year when I moved out of my apartment to travel long-term.

So why do people hate his films?

Since I’ve already talked about a few of these, this section will be fairly brief.

He is lousy with actor direction.

Actors seem left to their own devices in his films, and there are some lousy lines and performances. For every Comedian and Rorschach in Watchmen, you get Silk Spectre 2 (who admittedly, was a bland character to begin with) and Ozymandias. Sucker Punch is rife with blah also. I really like Jena Malone, but after one viewing of the movie her performance really grated on me.

My easy go-to example of this is the Hallelujah sex scene in Watchman. It was really long and people started to weird out.

Another great example is how Sucker Punch is rife with hyperbolic tragedy and super misogynistic plot elements. It’s about a girl who is abused by her stepfather, who shoots her own sister, who is then locked up and lobotomized? Ha wuaaaah?

The Watchmen sex scene was just gratuitous, and we Americans would much rather watch someone’s bones punched through their arms than see two people having simulated sex for like 60 seconds. Hey, some of us went with our parents to that movie! That’s AWKWARD.

The stuff in Sucker Punch though? Yeah, it’s a bit unearned, and I think that it works against the goal of the movie.

I have a theory:  Zack Snyder loves and respects women, he just blows it on the execution side. And as much as that deserves some criticism, I would much rather have that instead of someone who claims to adore strong women characters, but who doesn’t ever give them agency, uses them exclusively as eye candy, and doesn’t see them as people.

I share the opinion of a few articles out there, that Zack Snyder comes across some of the hate he gets unfairly. It’s definitely his fault when he puts together technically sound films that manage to piss off his base. But the furor he gets from nerds also feels forced, like there is some projection going on.

Final hate theory: I think the dude doesn’t look and sound like a nerd, so people don’t accept him as ‘one of us.’ I’m even going to be inflammatory and say it’s the same thing that makes white nerd guys hate on women who aren’t ‘real’ nerds. Guillarmo del Toro and Joss Whedon come to mind as people who make similar types of content (with better execution sometimes) who nerds adore. ADORE. SO MUCH OH MY GOD JOSS I’M IN YOUR HOUSE.

The difference? Guillermo looks like a nerd. Joss Whedon looks like a dude who may have once been a nerd. Snyder? Looks like he plays foosball professionally.

When did Zack Snyder ever self-flagellate? I’ve seen him speak and met the guy and blah blah blah and he has never done the Joss Whedon thing where he says ‘I suck super hard and you guys are awesome for believing in me.’

It doesn’t mean the guy isn’t nerdy, and it doesn’t mean he’s arrogant, but when it comes to associating with nerds, it seems like that kind of humble performance is a must. I suspect that at least a couple of the creators that are beloved by that base of people for their self-loathing are in fact putting on a show.

On that note, after rereading this article, I think if I weren’t the author, I would probably leave a snide comment. 😛