Cage Match: The Last of Us versus Bioshock Infinite 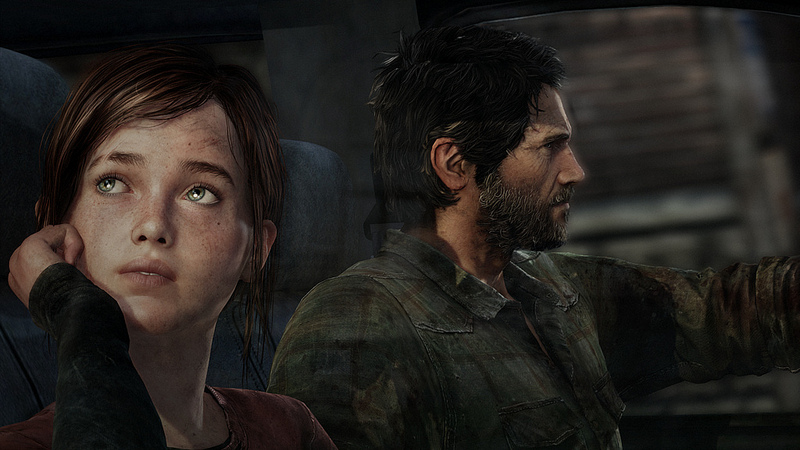 Cage Match: The Last of Us versus Bioshock Infinite

I am PS3-less right now, so I cheated like a bitch and watched a marathon video of all the cutscenes and some gameplay from The Last of Us, Naughty Dog’s new opus. I love Uncharted 2 and Uncharted 3, and this game is easily on par, but with a wildly darker tone. I think I missed something in my choice of experience, unfortunately – I am less acquainted with the infected and their creepy Cordyceps-inspired fungus. Most of what is missing from this six hour video is ~9 hours of sneaking around and killing Infected and people.

I think the writing was particularly smart, and like the Uncharted series, Naughty Dog gets by the also-ran subject matter with sharp execution and absolutely lovely acting. The Last of Us is not an original story. It takes ideas from The Road, The Walking Dead, and from zombie apocalypses beyond name. But the fungus idea is a unique twist, and like I said, the execution is second to none. There are very, very few studios doing great motion capture work. From what I understand, we’re down to Ninja Theory, and Naughty Dog.

I am particularly impressed with how deftly the game turns player-character Joel into an unlikable monster (that you still want to play as). The opening sequence is poignant and important to his arc, and then when things pick up in Boston, he is largely passive. It’s the cool-and-brutal Tess that sets up the way Joel works in his world. Her cruelty makes Joel seem sort-of good by comparison, but not so good that you think that he is the person we see in the opening minutes of the game. No, Joel is a different guy now.

I love Tess. Tess is an awesome, scary, complex character, and it’s also because of her (and people’s reactions to her), that you learn that Joel is seriously bad news. It’s one of the few times ever that a game justifies the huge body count your player character creates. Joel and Tess aren’t just a couple of smugglers. When she says she wants to find someone who has wronged them, and it all sounds like normal business, you really believe that ‘normal’ for these two involves killing a ton of people.

By the time Joel ends up paired with Ellie, his curmudgeonly nature makes complete sense. You empathize with him enough that his ways are shocking, but understandable.

Protip: I’m avoiding spoilers this time around, but if you haven’t beaten both of these games, my nudges and winks are not going to make much sense, I think. Be forewarned!!

I criticized Bioshock Infinite for how it dealt with its female companion character, by selling her down the river. It was a huge bummer, because Elizabeth is the only person you really ‘see’ in that game, and she was wonderful, and she had no opportunity to make any kind of lasting choice in the end. It was yet another example of a story serving the Big Plot Twist instead of the characters, and Elizabeth was yet another example of a promising, strong-willed female character who ended up with zero agency.

The Last of Us also has an ultimately subservient companion character in Ellie, and she is also brilliantly created. Her acting and motion capture are marvelous. She’s stubborn, tough, likable and naive. And like Elizabeth, Ellie stands her ground and argues when your player character is out of line. All that said, the way the characters are treated couldn’t be more different.

Many people are comparing the two games as identical masterpieces. They’re wrong, though. This is a Battle Royale/The Hunger Games comparison, born out of a lack of understanding of each story’s underlying mechanics. Bioshock Infinite is a plot-driven story, while The Last of Us is a character driven story. Joel isn’t secretly The One around which the game’s universe revolves. There are no zany cosmic plot twists in The Last of Us. There is no shadowy conspiracy behind everything. It’s about Joel and Ellie, and the way they really get into each others’ heads.

And on that note, let’s acknowledge the Thematic Integrity the game shows between its apocalypse and its theme. The crazy fungus in the game eats your brain and eventually sprouts from your head and body in a gruesome manner. It makes you flip out and kill people. Ellie also happens to make Joel flip out and kill people. At numerous points in the game, characters act against their survivalist natures because of their relationships to other people. Smartly done.

And then there’s the ending. The Last of Us ends exactly, EXACTLY where Bioshock Infinite SHOULD have ended – with Ellie doing something. In The Last of Us, Joel says something, and Ellie makes a choice. It’s a small choice on the surface, but in the context of what’s happened, it’s exactly the reaction we need to see to feel complete about the story. It’s also chilling and heartwarming in equal measures. Naughty Dog could have easily made this moment only about Joel, with Ellie blindly reacting to him, but she doesn’t. She listens to what he says, and she clearly chooses to believe him.

Marvelous! As in all things, the real meat of an interaction is in the reaction. Ellie reacts, cut to black. Done, bam. Good story.

I think that the image I used at the top of this article is pretty apropo. Joel is who drives the story forward, but Ellie is the one that we look to in the end. Naughty Dog owned that concept.

Update: Bruce Staley from Naughty Dog did an interview over at Kotaku regarding the game’s wicked sick writing, especially around the ending moments. It’s good stuff, provided you’ve beaten everything and don’t mind a tremendous deluge of spoilers.