Arcane – 10 lessons from the Netflix show 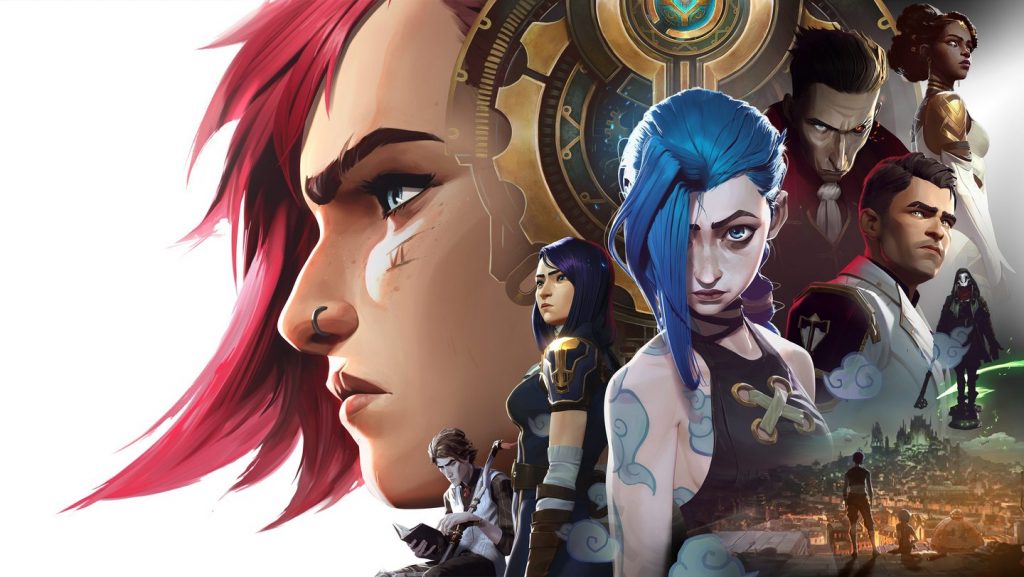 Arcane – 10 lessons from the Netflix show

Just finished watching the first season of Arcane on Netflix and…I was surprised how much I absolutely loved what is ultimately:

So perhaps, just like I did with Neon Genesis Evangelion, we can put on our writer-filmmaker-thinky caps and take a look at this gorgeous, incredibly well made animated science-fantasy show.

*I think my boy Timo is from a jungle?

The Setting is the Story is the Setting

I lied above, I wasn’t really all that surprised I loved Arcane. It’s a Science Fantasy story with young adult characters, mad science, and a city of the accomplished that exploits an undercity. It is similar in vibe and setting to my novel Wicked City. When I have dark dreams, they’re of places like Piltover and Zaun.

As in a bunch of genre fiction, but ESPECIALLY in stories set in strange cities, the fundamental flavors in the story – its theme – are mirrored in the setting. Arcane’s main characters are two sisters. There’s drama and love. It’s complicated. Family can be painful. That sounds an awful lot like a relationship between two neighboring cities, one of which is polluted and poisoned and exploited by the other. Doesn’t it?

A lot of these critical analysis writeups are useless to a creator, because they look back on a completed work with reverence and say inane things like, “You should do time jumps like Pulp Fiction does, because that movie is good.”

That is a useless bit of advice.

You can’t write from ‘I should copy a thing I revere.’ But you can absolutely look at your work in progress and ask ‘What’s the dynamic or idea that keeps showing up in this book/movie/game/whatever? Where else can I have it show up?’

I like titling these in the same format as hit Smashing Pumpkins song ‘The End is the Beginning is the End.’ Yes, I own the Batman and Robin soundtrack on vinyl. It’s been a weird pandemic.

In a lot of genre fiction (but again, very frequently in science-fantasy), you’ll see the main characters and their relationship mirrored in many of the side characters. Let’s count on our fingers and toes just how many pained familial relationships there are in Arcane. We could be here awhile. I won’t list them all, in the interest of spoilers, except to note: I read Heimerdinger’s relative to be the city itself, since he’s a little thousand year old guy who founded the place.

A story absolutely does not have to be filled to the brim with the exact same relationship dynamic, but if you’re really digging into an idea (a theme, again), this is how you seed different flavors and angles.

Protip: Mirroring drama also creates stakes. If your main characters are dealing with a potentially unforgivable rift, doesn’t it create a bit of uncertainty for your audience if there’s a couple of very similar characters who fail to work out their differences? Violently? It happened to them! Why couldn’t it happen to our heroes?

All X-punk is Science Fantasy

I’m making an edict, and I hope it’s controversial. All the X+punk genres are now under the science-fantasy umbrella.

We now have a punk for just about every decade between now and the 1880s. Steampunk is a pretty known quantity, as is Cyberpunk. Those cover the ~1880s and 1980s respectively. But at this point we also have:

I made up those last three and I think the names should become accepted in the zeitgeist. Anyway, the list goes on. This bullet point is more of an admin thing. Moving right along…

Be Careful About Losing Texture

Abstract and bizarre worlds, especially those built on tropes, run the risk of losing depth and the audience. This is a constant risk in fantasy and scifi. We need access to detail to make it seem real. How does this room smell? How does it feel to ride in the robot’s hand? What’s that weird purple stuff taste like, Silco?

Just take the time to tell us. Make us sense it.

The Titles are Secretly for the Fans

The opening credits for Arcane follow the style of modern TV. They’re gorgeous and stylized. I think they completely rule, and like with other great title sequences, the more I see them, the more excited I get to watch the next episode of this angsty, bloody, magic-y show.

Is there a book analogue? Maybe, if a book series’ covers all match. A video games analogue? Sure, I see the Destiny 2 title screen every time I go work at my space job. Is this something you can use as a creator? Sure, it’s a visceral example of branding, that old corporate buzzword.

No One Cares About Accents

Do you remember Disney’s Robin Hood? Where Robin’s a British fox but everyone else is from the Old West? Did anyone care? I don’t think so.

That happens in Arcane too, and now that I’m writing it out, I think this happens a lot in genre media.

Like a lot of things, accents don’t matter much as long as the show is good. What you get right matters more than what you get wrong. And to add a little to that idea, there are things that people just plain don’t care about at all.

Lean into the Weirdness

Arcane is a truly weird show, and I don’t mean its setting. I’m talking the plot, how it weaves. It’s sprawling and surprising (unless you’re steeped in that sweet League of Legends lore) and characters come and go in ways that just don’t feel normal to trained eyes.

I think it’s because most TV shows are made with a certain process, where you build a story around compelling characters and develop and iterate from there. Stories emanate from a core character, or maybe a pair?

Arcane had an unusual challenge: it was a prequel to a video game universe. And not just any game universe. If this were a game with a relatively normal linear story and setting (Halo! GTA!), you would probably end up with something that looks and sounds more like a traditional genre movie. But League of Legends is a Multiplayer Online Battle Arena (MOBA) game. I think that colored how the team went around building the story.

In a MOBA, players each choose a single champion to play as, and they’re all dripping with character. It’s a design thing that’s bled out into shooters (Apex Legends, Overwatch, Valorant) and it makes it so that, rather than there being one main character in a game, they’re all main characters.

Did that affect how they wrote the series? I think so. A fan would be deeply upset if their character showed up and got killed unceremoniously five minutes in. Hell, it’d be upsetting if the character showed up and merely didn’t get to be cool. The end result is, if you’re new to the lore, it just doesn’t tick like a normal TV show clock.

And I think that’s something the creative team leaned into, rather than trying to get around. The other thing they really got right were the…

The show is not good because it’s adapted from something interesting and strange. It rocks because it’s well executed on. All the little moving parts that come together to create a piece of media are on display and the vast majority are extremely well done. It’s just great filmmaking.

Great performances from the voice cast. Great music (yes, I’ll talk about the Imagine Dragons song in a second). Surprisingly well written dialogue, that avoids the most egregious sins of fantasy.

And yeah, the animation in the show is just startling. It looks gorgeous and everything from character animation (ugly crying! open mouth kissing!) to the fight scenes to the effects are inventive and polished and dynamic.

If the conversations I’ve had with friends at the Burbank studios, get ready for a bunch of stuff that looks like Arcane.

Hey the opening titles are set to an Imagine Dragons song. I used to do Crossfit to ‘Centuries.’ That band is kind of dorky, right? The music is so bombastic and self serious!

And yeah, Arcane is bombastic and self serious too. It is Shakespearean, with its imploding families and long simmering resentments. And it’s also a world where a little fuzzball guy with a fuzzball dog is the oldest wisest scientist on the planet, and uh, everything is filled with clock gears that whir.

And you know who gives zero fucks? Arcane. It just is itself, all the way. Complete commitment. It owns its tone and I love it for that. The show is unashamed to be what it is, and that’s what makes it cool. Can you imagine this show, but the characters are endlessly commenting on the silliness of their world and each other? Boo.

I think I wrote this one for myself, but you’re very welcome take that lesson to heart. Own your vibe and you’ll find your audience.

On that note, I would like to say I am no longer embarrassed I own the Batman and Robin soundtrack on vinyl.

You’re not Going to Make Arcane

And I’m sorry for saying that. I want you to make good stuff!

Building off the above note about being yourself…I’m not sure you can authentically set out to imitate something. I get it. I do. Arcane is super good. You might sit there and think, ‘I want to make that!’ And that’s a rad impulse to have as a creator.

But! The only way you end up with something like Arcane is by trying to make something be itself as much as possible.

Arcane has no business being this good. It’s a video game Netflix adaptation. It’s a game world (League of Legends) inspired by another MOBA game (DOTA) where the characters are just models from a different game (Warcraft 3) given more abilities. So many things had to click into place just so, to make this show spark with life.

Maybe instead of thinking, “I want to make that,” the thought to try out is, “I want to make something that makes me feel like that does.” That’s what we’re out to do in this line of work, right? Take that great big reaction we got from a thing we loved, and give that to others.

Alright. I made a top 10 list. But it’s a good one with substance. I hope it was a good read. I’m going to go wait for season two of this thing.