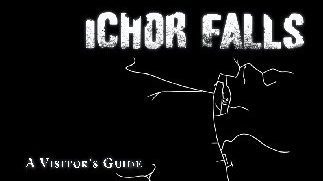 I’m bad at spooks. Case in point, I didn’t even know Kris Straub was an internet horror icon until 2018, and I’ve known about the guy since like 2004. I’m not much better at Halloween. I have been known to assemble a costume, sometimes a monstrosity of my own design (see below), but I don’t reliably immerse myself in creeps and crawls every October. It’s a sporadic urge based on location and social circle and whether or not the SOMA teaser “Vivarium” had come out that summer.

This year I wanted to make an effort of it, so I went on a Kris Straub horror spree. I bought Broodhollow, Ichor Falls and Candle Cove in print. Reading Ichor Falls: A Visitor’s Guide was an opportunity to go back to the early days of his horror work and I really enjoyed it.

I know Kris from the early webcomic heyday, when I read Chainsawsuit and Starslip Crisis. When he co-created Blamimations on Penny Arcade TV (remember those??) with Scott Kurtz, the jump from comic to half-animated sketches made sense and led to some pretty brilliant stuff. There’s something fascinating to me about the subtle flavor a comic artist might bring to sketch comedy, as opposed to a comedian. Am I imagining or overthinking it? Probably. I’ve forced so many people to watch Blamimations over the years.

Flash forward to a couple of years ago, when Local 58 hit the YouTube horror scene. I don’t remember exactly when I finally realized it was him, but I was surprised. It felt like a curve ball, to see Local 58 come out so polished and fully formed from the guy that did All Houses Matter.

Of course, nothing happens in a vacuum. Dude has had a following for his horror work since at least 2008, when he started IchorFalls.com. It’s still up, and you can go there right now. It was a mixed media experimental horror anthology thing where the work (including user submitted pieces!) was loosely connected, Silent Hill style, by the titular Ichor Falls, a miserable little town in West Virginia with a storied and melancholy past.

The website seems to have functioned a little like a curated collaborative storytelling website, like my alma mater Psychic High School. Ichor Falls: A Visitor’s Guide collects the website’s fictional town history along with short stories by Straub and contributor Sarah Pharris. The collection runs the gamut from historical documents to forum threads to local legends to a few surreal experimental pieces that hit on a specific unsettling idea and read like the transcript of a fever dream. My personal favorite, unsurprisingly, is “Candle Cove,” which was adapted into the first season of Syfy’s Channel Zero. I also really dug “The Hirsch Camera,” which is similar in format to an SCP entry, and “OSD09-H03,” which is short and strange enough that I’ll leave it for the reader to discover. If it isn’t clear, I really liked the book.

The actual collection is brief, just 79 pages. The shortest story is just shy of a page long. And I don’t mind at all. It was like having a collection of poetry handy, except the poems were about forest monsters. I think constantly about the two hour feature film, the hourlong television episode, the novel. Are these formats outmoded? Probably not yet, but the internet has given us new short options and the appropriate attention span to match.

Side note: someone give me my Something Awful Forum in Review annual collection hardbound, like an encyclopedia set.

While we’re talking about the physical book, I do have two minor negative items. The first (and I apologize in advance for some publishing inside baseball stuff): the formatting for the printed file doesn’t account for the space taken up by book binding, and in my copy the paragraphs of words dipped deep into the crevasse at the middle of the book.

The second is that I discovered that the content of Candle Cove and Other Stories is largely the same as Ichor Falls. The book description online does state this, but I’d had wine when I ordered both. Womp womp. It appears Ichor is a traditionally published book through Nightlight Press, while Candle Cove is Straub’s indie published version. It seems like there was a rights reversion and he put the new book out, which is a really common thing authors do nowadays. Were I to do it again, I might have just stuck with Candle Cove, but it isn’t a big deal.

If you’re That Guy that wants to just read the website, Kris Straub’s also got a patreon and it starts at literally a dollar a month, so you can be That Guy but also cool.

Like with the Blamimations, I’m fascinated by the connective tissue between Ichor Falls and Local 58. These shorts function as creepypasta and creepypasta-adjacent, a result of online culture from the late aughts. There’s shared DNA with modern YouTube horror, but the medium and a decade of evolution (and VHS filters) refined and expanded those ideas. Analog horror is having a moment, though outside Marble Hornets and Local 58, I haven’t found anything that’s blown my mind yet. Except, of course, for the old tapes of Austin public access show Raw Time’s call in segments. But those are real.