A Guide to Enjoying Comic Con 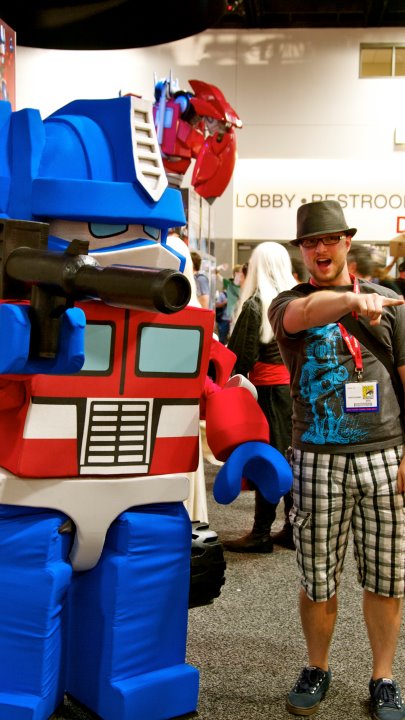 A Guide to Enjoying Comic Con

Unlike my post about travel, the advice here about Comic Con is all valid, but I don’t necessarily endorse it.

Today marks the first official day of San Diego Comic Con, and I am not going (because I moved somewhere not-LA). If you go to Comic Con, you probably like Star Trek, or maybe Gundam. Also Superman. This is totally okay. I went to Comic Con every year from 2009-2012. As such, I consider myself a ‘graduate’ and I can now impart ‘wisdom’ on you. With this wisdom you will be to have the ultimate Comic Con experience.

All you need to do is follow the following checklist:

One of the prerequisites of attending Comic Con is that you must pass through the looking glass (or television screen, if you are PUMPED about television). The way you do this, is by traveling five hours.

Flights from across the country require travel and airport time totaling at least five hours.

Road trips from across the country to Comic Con will take at least five hours.

If you drive to Comic Con from L.A., you will be sitting in traffic on the I-5 for roughly five hours. What is normally a two hour drive is warped into an opportunity to sit next to the nuclear reactor at Camp Pendleton for twenty minutes.

You might ask, ‘What about San Diegoans? They don’t have to drive five hours!’

San Diegons do not go to Comic-Con.

Get a Comic Con pro pass.

The easiest way to go to Comic-Con is to be a professional movie director. This is relatively easy to do.

I recommend my alma mater, Full Sail Real World Education, which was a pretty hard school, but also pretty short, as far as film schools go. Current students at Full Sail get a Bachelor of Science degree in about two years, at a cost of roughly $100,000. So I hear.

Then, you just need to spend several thousand man-hours and thousands of dollars (maybe not your own?) producing content on spec that gets you an IMDB page and some awards. That should be enough to show that you are a creative professional, and you  can get into Comic Con for FREE. You even get a guest pass you can barter, perhaps for a motel room floor to sleep on.

This is an even better deal when you consider that normal tickets for Comic-Con sell out in minutes. In coming years, you will not be able to barter manslaughter for a normal Comic-Con pass, so 2-4 years and low six figures isn’t bad.

If you are reading this blog you are too old to be hugging 14-year old girls and boys.

In fact, stand in a lot of lines.

This is a great opportunity to read the graphic novel you just spent $40 on cover to cover. Then it can go back in your crazy big Robocop-reboot-printed-official-Comic-Con-bag for you to lug around for three more days.

Also bring a way to charge your phone, because you are going to play so much Rayman Run. Or maybe Super Hexagon.

Nice touch: Get the people in line around you to download SpaceTeam and make friends by shouting at each other.

Not nice touch: Touch the totally ripped Spartan cosplayer guy in the butt, though his red cape. Over and over.

Miss your most treasured panel.

Look, you aren’t going to get into the Legend of Korra panel because you are in the wrong line. I’m sorry. I know it looked like the right line, and it may have been the right line when you got into it, but you will never see Michael DiMartino’s perfectly shaped bald head or Brian Konietzko’s excellently pressed shirt collars.

I heard they’re premiering the first episode of Season Two. Oh buddy, I’m so sorry you’re going to miss it.

Hey, at least you’ll get to see an episode of Grimm when you get into the hall ninety minutes later! You like Grimm, don’t you?

If you’re lucky, one of the big conglomerates that makes massively expensive entertainment will give you something free. It won’t be as good as that free copy of the Legend of Korra Book One Soundtrack, though.

When you go to one of the many pubs in the gas lamp district to recover from drowning in five-thousand people at once, you will see one or more attractive people that you want to Get With.

This is always good, and at Comic Con it’s especially fun, because the girl is  Karen Gillan or Felicia Day, and the boy is like, Gareth Edwards or Nathan Fillion or whoever nerd girls Get With now.

If you play your cards right (here is the playbook I recommend), you can have a nasty Comic Con tryst and it will be your hotel room they will end up drunk and naked outside of.

Ha ha, I kid. You’re not going to have your own hotel room. You’re going to be sleeping on someone’s floor, remember?

That will make the tryst more fun, if you are anything like me.

I hope you like web series about plucky slacker nerds who hang out in a [comic shop/video game shop/crappy cafe/awful big box retailer parody/pen and paper RPG table in a garage] and there is one manic-pixie-dream-[guy/girl] that the other, actually developed characters are totally into. Oh, and one guy is totally [wacky/belligerent/wacky AND belligerent].

You will have a chance to meet the cast and crew of this project. So…I guess that’s cool!

Wow! He voiced Bender! And Jake the Dog! And he played the Joker in Batman: Under the Red Hood. And I guess he was in Gears of War.

Never mind that you can walk up to the celebs at autograph booths and just chat for free (if they aren’t busy). No, you want some writing on a piece of paper.

This is the same impulse that will flare up in your mind during that wicked-sick live performance of Ticks and Leeches, even though Maynard NEVER performs it because it thrashes his noise muscles. Better record it, and make sure you have a recording instead of experiencing it. After all, you want to remember it!

Nice touch: Ask John DiMaggio what he thinks of Adventure Time, because he will say the show makes no sense.

Don’t see any of San Diego.

You’re not going to leave the area around the convention center.

That’s fine, it’s like you are actually going to somewhere else that happens to be in the middle of San Diego, where San Dogians never go. It’s kind of like Potsdamer Platz isn’t really Berlin, even though it’s in the middle of it.

Which incidentally, is where I am right now.