Batman: Under the Red Hood and getting it wrong

Batman: Under the Red Hood and getting it wrong

First off, I did a quick post on Tumblr about how much I love the Soma teasers. If you like sci-fi, and you like horror…you should go check those videos out. Also, I’ve revamped the ol’ mailing list – if you want exclusive short stories and other goodies from me, stuff not unlike that Soma teaser, go and subscribe! I update a couple of times a month. October is Halloween time, and as such, I’ll be sending out something nice featuring rusting metal and things that go *screech* in the dark.

Now, onto the subject of the day. 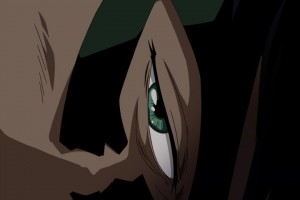 Batman: Under the Red Hood is a really fantastic movie. It’s might be the best animated batman movie. Year One, Batman Beyond: Return of the Joker and The Dark Knight Returns are all great. But when it comes to really delicious explorations of the whole Batman psyche (and his flaws), I think Under the Red Hood is more compelling. I have seen it many times. There’s a reason it has a 100% rating on Rotten Tomatoes. And yet, watching it again, with so much familiarity with the tale’s twists and turns, with the timbre of the actor’s voices, with the lovely little touches during lovingly animated fight scenes…

I am struck most by the things the movie got wrong. 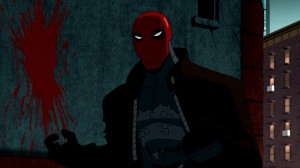 Continuity errors, for example. The train station that the Red Hood bombs to get away from Batman and Nightwing apparently has both a giant pole that falls but never hits anything, and a train that careens normally through a place that just exploded. We never see either again! There are also some weird entrances and exits. Nightwing just shows up early on as an excuse for some exposition, and then disappears. It’s a minor gripe, so please don’t spam me about how this is a dumb complaint. I’m making the point that, in the world of tightly wound screenwriting, that’s really something you shouldn’t do. And yes, even though most of the animation in the movie is good to great, there are a couple of really rough shots that I never noticed until this viewing.

This is a very good movie full of mistakes. 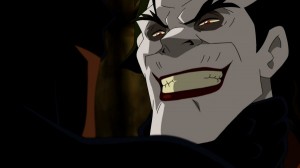 “Come on, big guy. Are you really gonna do it this time?”

These were mistakes I didn’t see because they were woven in between marvelous storytelling and acting, and excellent animation. I think there’s a great lesson here. It’s one you’ve heard versions of before. Sometimes they say ‘perfect is the enemy of good’. That’s some good motivational flimflam, sure. There is another way of saying this that I think, like the idea of ‘thematic integrity’, gives a creator more focus towards making something of quality without being bogged down by contradictory advice or over-thinking.