The Key to Marketing Your Work is to Stop Marketing It

The Key to Marketing Your Work is to Stop Marketing It 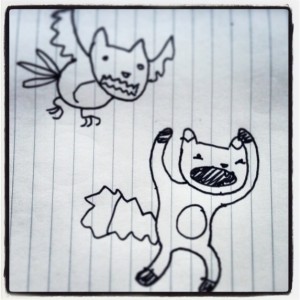 I’m tired of being slam-marketed garbage I don’t care about.

These are the first words I typed into the blank document that would become this post.

Clearly, that came from somewhere. Such frustration!

I have a lot of friends and cohorts who make things. They frequently tell me about their stuff. That is totally fine. ‘Hey watch my thing!’ Ok, cool! Done.

But that’s not how all marketing I’m subject to goes. I’ve also gotten repetitive, barely personalized direct contacts. These contacts sometimes slip into begging or forceful requests for money.

That is less fine. In fact, it’s terrible for all involved parties. It’s bad for me because I don’t really get to say no without it becoming A Thing. It’s bad for the person contacting me because forcing your friends to buy your thing is not a cornerstone of good business.

Fans are your fans.

I actively sign up for news from creators I like. I signed up for Carina Round’s Facebook and I get Songkick notices about her concerts, because I think she is awesome, and her music is great writing fuel. Plus, at one of her shows I got to meet Billy Howerdel. That may not mean anything to you, but I thought that was super amazing.

On the other hand, friendships often predate the thing your friend made. You are not necessarily friends because they make things. This means you should give your friends some love and space if you want them to read/watch/go to your thing. We all get marketed to endlessly. Your friends may not dig avant garde shoegaze mixtapes! They may just like how fun you are to hang out with.

Side note: I actually like the WP series. I was speaking hypothetically.

If you are the latter and not the former, it can be super frustrating to be endlessly badgered about something you don’t necessarily want to buy, but feel compelled to by friend guilt.

There is a better way!

Below are instructions for how to sell to someone. There are many types of selling. This is the awesome kind that legit people do, because it leaves the sellee with freedom to choose. People have an ugly idea of what sales and marketing is, mostly because people are doing something other than the below steps.

Step One: Tell them what’s in it for them.

If you’ve worked retail, you have heard the siren cry of the difficult customer: ‘What are you going to do for me?’

It’s actually a question that everyone is asking, at all times. They just don’t know they’re asking, and you haven’t heard it. But it’s there. Everywhere.

Incidentally, this tacit question is also difficult to anticipate and answer. Experienced businessmen with amazing accomplishments under their belts can be absolutely lost with this one. And that’s before fear of rejection turns into a spectre, claws gripped tightly to your amygdala, and your pitch turns into a twisted game of forced begging. But I’ll get to that with step two.

Thankfully, when you’re looking to sell people on entertainment, we already know the tools we use to answer the question of ‘What’s in it for me?’ The answer is ‘you’re going to enjoy absorbing this media.’ And we pitch them on why they might enjoy it with tools you are no doubt familiar with.

You should ALWAYS lead with this info when you’re pitching someone, even if they are a fan or friend. Tell us why we might like it! It’s so bizarre to me that pitches often ignore this element. They tell us WHAT but neglect to tell us WHY.

For example, I’m writing a sci-fi/YA novel. It’ll be out this year. When people ask what it’s about, I have my short pitch that goes something like, ‘Young teenagers in a steampunk dystopia pursue dreams of power and romance…with apocalyptic results.’ That’s a decent pitch for the book, but what really sells it for me is the next part, where I add, ‘It’s one part naïve romance, one part political scheming, and one part chaotic, brutal violence.’

That’s what’s in it for the reader. That last sentence. Those three elements are the key ingredients of the book, and someone will quickly know if that’s their cup of tea or not.

Now that you’ve answered the question ‘What’s in it for me’ you need to invite them to try or buy.

This sounds obvious, but I can guarantee that 95% of ‘invitations’ are not actually invitations. There is no invitation. There is cajoling, begging, demanding, or even worse…nothing!

‘But I was inviting them!’ I wail as I bang on their front door. I’ve been there for twenty minutes. I know they’re home. I saw one of them in the kitchen through the window.

The two key elements of an invitation:

And not only that, but a real invitation gives the invitee the freedom to say no without any consequence. A real invitation is a magical thing. However, because we are all human, when something is REALLY important to us, it’s the absolute last thing we’re likely to offer. That’s because we’re terrified of that ‘no.’ Because of that fear, we beg, and try to control the other person. We talk too much. We lock them in a room and have them sign over their power of attorney  or worse, make them watch two hours of student improv shows.

It’s the reason why we have the old stereotypical scene of an awkward guy/girl asking an embarrassed girl/guy on a date. They’re toeing the line because of the terror of rejection and the invalidation that they have assigned to rejection. They think a ‘no’ will mean that they are a failure.

Incidentally, since I brought up awkward dating moments, there is nothing sexier and more confident than someone willing to ask someone out and be okay with whatever answer they get. Guys, write it down. And then underneath, write, ‘looking bad is the new looking good,’ and in parenthesis next to that write, ‘he means being vulnerable.’ And then next to that, write, ‘vulnerable, as in, extending an invitation that someone is free to decline.’

Remember! If you’re afraid of a rejection, that is your soul telling you that you are doing something that matters. Now is not the time to wilt. Now is the time to wear the fear and get on the horse anyway.

You can use these steps for just about anything. Pitching a guest post? Selling people on a show? Promoting your work? Talking to that gorgeous Scandinavian? Anything anything anything. And if you do it right, you will receive a TON of ‘no’s. You might even get some ‘HELL NO’s. But you’ll also get real, honest to goodness yes’s.

Oh, and you can still enter my Cover Design contest!

Are you a scrappy indie author who published a book online? Check out my Spring Cover Cleaning contest here. I’m offering a winner and runner up gratis redesigns for their books. Still accepting entries through May 15. Up your game!