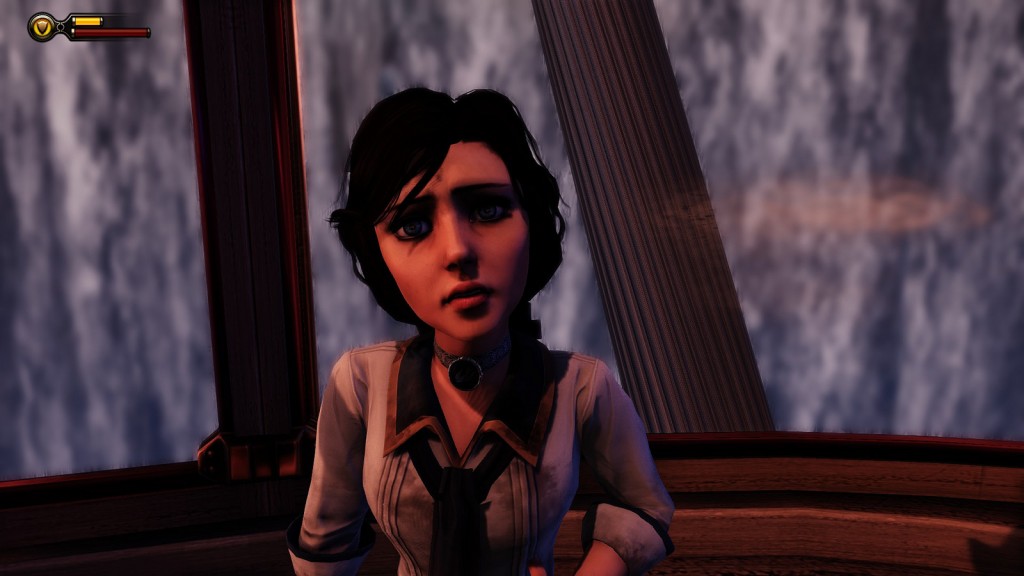 Bioshock is a phenomenal game. From the Luteces to Elizabeth, from skyhooks to Songbird, the game oozes astounding production value that makes the first Bioshock feel quant. Watch the escape from Monument Island with Songbird’s pursuit, through to Booker falling into the water at Battleship Bay. It is astounding, blistering, pulse pounding entertainment, and there are plenty of moments like it.

To be honest, the original Bioshock had a similar effect on me. An astounding, controversial world, with morally questionable choices…the original had no element like Elizabeth, but the rest of the experience feels undeniably familiar. And then, like in the original, there are some plot twists and the game’s end leaves me feeling strangely underwhelmed. I figure the major issue I have is that Bioshock Infinite promises and then denies the player three things: Columbia, Elizabeth, and Bioshock.

And by the end of the game, both promises are unfulfilled, undermined, usurped in the service of promise number three – that you would get a Bioshock game. I’m of the opinion that this can actually be fixed with an extremely small addition.

At first glance, we the players, are getting a sickening and bizarre adventure that winds through a World’s Fair version of turn-of-the-century American Exceptionalism. We’re going to go on a theme park ride where we careen on rails through beautiful squares full of patriotic imagery, where interracial couples are publicly shamed and assaulted, where capitalism is twisted into an ugly exploitation of the working man, where the crazy religious leader high in the tower is worshipped as a ‘prophet’. But, the setting in Bioshock Infinite, like with Rapture’s Objectivist Dystopia, is meaningless window dressing. The story has nothing to do with crazed religious cults of personality, turn of the century nationalism, racism, etc. Ken Levine said (paraphrased here) that the goal is to give you choices that feel yucky, not necessarily that have any real consequence, and that the setting is not necessarily commentary. This is what he did with the first Bioshock, and there too, the press was happy to go a little crazy questioning whether the dude was actually saying Ayn Rand was Wrong or whatever. This is the same as the reaction people had to the spinning top at the end of Inception – it’s a meaningless image designed to press buttons. And religion, racism, and objectivism are all great big buttons for Americans.

Also regarding the setting:

There’s also the common problem any genre story with a super crazy science fiction ending has – if you make the story about everything, or make it so the story never happened, I’m going to ask what the point was.  Bioshock Infinite does both of these – the game teases us with potential social commentary that ends up being empty window dressing. And then, and I promise I will get to this later, it undermines the only really relatable character arc in the entire game with sci-fi All Story parallel universe nonsense. I’m going to get into that huge handle of gin my ex-roommate left in the freezer. After those two moves, why should I care about the story?  Okay, an example. Imagine you are in grade school, and you like someone, but you’re too nervous to ask them out. You stammer something to them in the hall and then they asks if you are asking them on a date, and then you assure them you are not. Then, later, you go back in time via a magic lighthouse and drown your father so you were never born.   But let’s be serious – the real critique I have to level at Bioshick Infinite is in its treatment of Elizabeth.

At the end of the day this is just the story about a girl striving to escape her tower so she can go live life.

Elizabeth is what we were sold as the key component of Bioshock Infinite. This is what we loved about the E32011 video. It’s the reason I think the internet was upset that the boxart features Booker and not her. Elizabeth rocks. We were promised a living breathing companion and she is almost exactly that. She’s believable, she’s vulnerable. She even does the Pixar/Dreamworks ‘one raised eyebrow’ thing. I love her to death. And yet, the end of the game sells her character arc short in service of a clever plot twist. Why is it that the ending of the game breaks Elizabeth’s character? Okay, maybe I’m not making sense. Let me explain. When we first meet E, she is a girl trapped in a tower because of her crazy powers. Like any fairytale character, it is entirely not her fault she is there, and she years for the world outside (even opening a riff to 1980s Paris while you watch!). And then Booker busts her out and they’re off on a journey where their every move is watched and controlled by Comstock, the religious crazy guy running the whole sky city. And of course, Elizabeth has an amazing, complicated relationship with her unstoppable death-robot ex-husband metaphor, Songbird. Much stuff happens, and she kills Songbird, which is poignant storytelling, because they have a fascinating relationship. And then something rediculous happens and Bioshock Infinite turns into an All Story – where your guy is The One and all universes exist at once (there’s always a lighthouse?!) and of course, your player character is the Most Important Dude in the entire game. And then Elizabeth kills Booker, even though this causes her to cease to exist as his daughter. This is bad storytelling, because it is inconsistent with her character’s wants. Are you telling me the thrilled-to-be-alive girl causes herself to cease to exist? What, because she lived to bomb New York in the 1980s? The thing that sold us the game, was that we would be the protector and companion of a fascinating, emotionally believable woman. And then the twist ending robs Elizabeth of importance (and believability), and gives that importance to two guys you NEVER SEE. One because he is an invisible, ineffectual villain, and the other because he is the player. Surprise! You probably forgot, but the story was never about Elizabeth. It was about ‘you.’ I guess that explains why Booker is on the box art. Maybe we shouldn’t be mad about that.

The box art should have been his hands and screams, because THOSE are in the game all the time.

This is not a terribly unexpected plot twist when you look at the first Bioshock. It’s just a huge-ass bummer, because the first Bioshock never promised a living, breathing character to hang out with. Infinite did. I don’t give a shit about Booker or Comstock. I want to see Elizabeth grow and change and live, in spite of all the darkness around her.

Oh, but she changed! She is the one who shows Booker the truth!

A valid read is to look at Elizabeth’s mercy killing of Songbird as her coming to terms with herself…that she realizes she is a monster like Songbird, who is too dangerous to exist, and the serial drownings at the end (Songbird, Booker, and Elizabeth by proxy) all sort of fit together. If that’s what they were going for, I acknowledge it is a structurally sound idea…tacked onto a character arc that is sadly wasted.

I believe you promised a quick fix?

The ending of the game features Booker drowned by a bunch of Elizabeth-ses who then vanish. The final one we do not see vanish, which is either a stylistic choice or a spinning-top Inception edit. Then the credits roll, and after the credits is a scene in which Booker is back in the room with the crib, calling it out for Anna/Elizabeth. We’re not really sure if she’s there or not. What we don’t have in that ending, is something for Elizabeth to do that isn’t in service of Booker. She spends her time acting as some kind of omniscient diety, except without that tremendous charm of the Luteces. We know the Luteces are able to jump through realities at will. If Elizabeth gains similar powers, why would she cease to exist? Make this the post-credits sequence instead:

Booker pushes open the door to the baby’s room.

“Anna?” he says. The crib sits in front of him. He cannot tell if she is inside or not.

From behind Booker, a voice, distorted. “I’m just checking on him.”

If the player turns fast enough, they see a tear in the wall behind them, where Elizabeth sits, sipping espresso at a cafe, one of the giant feet of the Eiffel tower in the background.

“Are you coming?” a voice says. It’s a man, but we aren’t sure who. Maybe one of the Luteces? We are not sure.

Elizabeth props a beret on her head, clearly enjoying the concept of hats, and spares one last look at Booker.

With a wave of her hand, the tear is gone, and the screen is black.

Something like that. That gives Elizabeth her story back, and also gives her a life outside of Booker and Comstock. This tiny addition makes her real again.

You can’t do that! It makes no sense!

It makes sense both thematically and within the confines of the story. Yes, the Luteces’ actions were designed to basically wipe the slate clean, so they want the whole thing erased. Yes, the original ending would fulfill that promise…but what a soundly unsatisfying ending for Elizabeth! One tiny addition to save the character who sold the game is not a tremendously outrageous thing to add. Plus, don’t multiple characters in the story spend time observing others through tears? Yeah, they totally do.   photo credit: The_JIFF via photopin cc photo credit: Dekuwa via photopin cc